The Chinese sticky cake is commonly decorated with lucky wording and given as door gift during Chinese new year.

If you never try one before, remember to take a bite and you will never forget the sticky texture, which in some are warned of sticking off grandma’s dentures. It is a teeth sticking goodness. 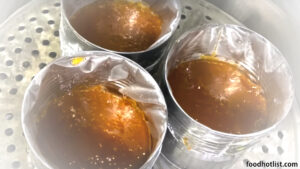 The Nian Gao is golden brown after been steam, just let it cool in room air and it will be ready to be eaten.

The making of the Nian Gao is also not too difficult as it sound. Mix the right ingredients and steam them in steamer, then let it set cool in room air, and walah, a simple cake is completed. Decoration is optional, but can looks good with lucky stickers on it and be given as door gift during Chinese New Year visits.

The step by step tutorial video on how to make a Nian Gao is as below. Placing the dough into a clear plastic bag with a container as the mold to make its signature round shape.

Boil the sugar over low heat and pour it into 600ml of boiling water, mix well. After cooling, add 500g of glutinous rice flour, mix well, sieve, pour into mold and steam for an hour.